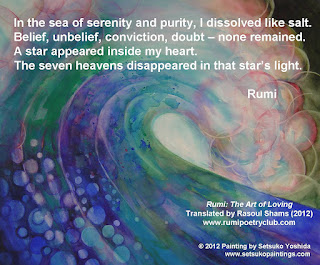 This week's posting will serve a dual purpose. In addition to announcing the new Mnemosyne poem (embedded in the photo above), I'd like to also announce that I'll be interviewing its translator, Rasoul Shams, for Tiferet Talk, on June 24th, 2012 from 7- 7:30 pm EST. As part of the interview, Rasoul has offered to read poems from his new translation, Rumi: The Art of Loving in both Persian and English. I can't wait!

Rasoul first learned of Rumi’s poems in his Persian classes as a young boy growing up in Iran,and now the works of Rumi and other Persian poets have been his spiritual companions for over three decades. Having lived and studied in Iran, India, Japan and the USA, Rasoul's life and education are rooted in a multi-cultural, multi-language matrix.

Rasoul founded the Rumi Poetry Club in 2007 (on the 800th anniversary of Rumi’s birth). Based in Salt Lake City, Utah, the club celebrates the poetry of East and West through its monthly meetings, annual gatherings, website, and publications.

As well, Rasoul has published a number of essays in such magazines as The World and I, Interrelgious Insight, Pure Inspiration, Light of Consciousness, Kyoto Journal, The Himalayan Journal, Mandala, Persian Heritage, Sufi, and the Rumi Review. He is currently working on another anthology of Rumi’s poetry.

In addition to the poems, Rumi: The Art of Loving  contains two fabulous essays, a very helpful list of terms and symbols, and several beautiful stories from Rumi's life. It was a joy to read.

*NOTE*If you're new to the blog, you might want to look at the first Mnemosyne Post to find out what this project is all about.

See you in the sea of serenity and purity--

Posted by Melissa Studdard at 7:21 PM

Anthologies That Contain My Writing

Listen to internet radio with tiferetjournal on Blog Talk Radio
Please be careful not to click the FB icon if you are already following my author page on FB; it will unlink you. If you are not already following, please join me now!